To Jargon or not to Jargon

This was a blog that I recently wrote for “Real Science at SOEST!” and thought I would share it here as well, since this site hasn’t received much attention in far too long! (current link)

Jargon, as defined by Google, consists of “special words or expressions that are used by a particular profession or group and are difficult for others to understand.” So, you can imagine why jargon is a natural target for science communication training and workshops. Hey, science jargon even has its own April Fool’s spoof article.

Well, as it turns out, defining jargon and identifying jargon create a bit of inherent irony. A word is only considered ‘jargon’ when it isn’t well understood, so when are science words ‘jargon’ and when are they not? Google’s definition suggests that jargon can be specific to a group, and not necessarily restricted to a technical field. In addition, Google gives the entertaining synonym of “slang”, which begs the question – are scientists actually speaking our own form of “Science Jive”?

One of the most challenging parts of science communication is understanding your audience well enough to choose vocabulary that will communicate your science accurately while still getting your message across. Therefore, we need to start thinking about our “Science Jive” in layers. How far removed is our target audience from our science field?

The Russian Doll of Science Jive 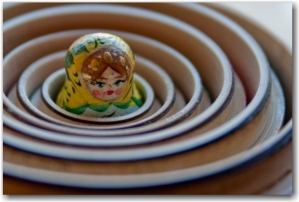 As with all science communication efforts, you must first understand your audience(s) before you determine how much jargon you can layer on. The smallest, innermost ring is your peer group (you are the doll in the center). Your peer audience will include members of your lab group, your collaborators, and even your fellow participants in a domain-specific session at a conference. Almost everything in this ring may be considered jargon to a general audience, who resides in the largest, outermost doll layer. And, although some of the jargon translations from the far inner ring to the far outer ring may be the most challenging (discussed later), the dolls in the middle are where things get really interesting. How well do you know your audience two rings removed? For example, I recently attended the 2015 AAAS conference in San Jose, CA. Having never attended an AAAS conference before, I was surprised at the breadth of science topics presented. They ranged from looking at the effect of epigenetics on the brain to 3-D printing of 4-D mathematical models to microbial oceanography, my personal ring of Science Jive. So, how do you know when to jargon and when not to jargon?

The best way to figure out your audience is to understand where they exist in the science communication space. Do they read popular science articles, like those in Scientific American or Discover? If so, getting familiar with those journals (if you aren’t already) will help you determine which jargon level you should speak to. For example, in situations where “addition of viral concentrates resulted in decreased photosynthetic activity” might not work, something like “after adding more viruses, the cultures started dying” might be perfect. From another perspective, if you are writing something for a government office, you might consider getting in touch with whomever is in charge of science-related issues. Depending on their background, they may only be one or two jargon rings away. Or, if their background isn’t in the sciences, they may comfortably reside in the far outer general public ring.

Have you tried explaining your research to a family member? Megumi Chikamoto had a great post (4 Feb 2015) on Real Science at SOEST! blog about jargon, relating to her 7 year old son and making her message more understandable to a broader audience.

Translating jargon takes a bit of trial and error. Pick a prominent jargon word in your specialization and start trying out alternative vocabulary with the lab down the hall, fellow students at a departmental seminar, or with other science departments that meet up for pick-up soccer games after work. In the end, you may still end up with a word(s) that can’t be captured at the level of accuracy you require. Another strategy is to develop an analogy for your research. Can you capture the dispersal model or biogeochemical flux pathway in a metaphor or image? For example, Donn Viviani, a graduate student in C-MORE, is able to transform his research into the simple process of making a cup of tea!

In the end, only you can decide when to jargon and when not to jargon, and it will take practice. However, there should also be a collective effort by every science specialization to establish some translated terms that are acceptable replacements for their domain. In some areas, such as climate change, this is already happening. But we shouldn’t wait for a social movement to motivate us! Scientists are people too, and we should be making an effort to communicate using language that can be understood by our audiences.

So, what is it that makes scientists seem “a bit odd”…?

Of course, there are the obviously iconic scientists, such as Einstein, who nailed the crazy hair lifestyle we now associate with a slightly unkempt genius, and Tesla, who was fixated on the number 3 and posthumously recognized to have obsessive compulsive disorder (OCD). But these science characters are unique, even among scientists, and most scientists don’t hang out that close to the end of the oddness spectrum.

However, the perception of “oddness” runs strong in our communities. Fermilab, a science education center affiliated with the Fermi National Accelerator Laboratory and the U.S. Department of Energy, ran a very cool project called “Who’s the Scientist?“. The project had seventh graders (most had never met a scientist) draw what a scientist might look like and describe who they are. The students then visited Fermilab’s Lederman Science Center (40 miles west of Chicago, if you are interested) and spent some time in small groups, chatting with physicists from the Accelerator Laboratory. After the field trip, students were asked to redraw their scientist, and the results were pretty amazing!

For example, one student (Amy) submitted this… 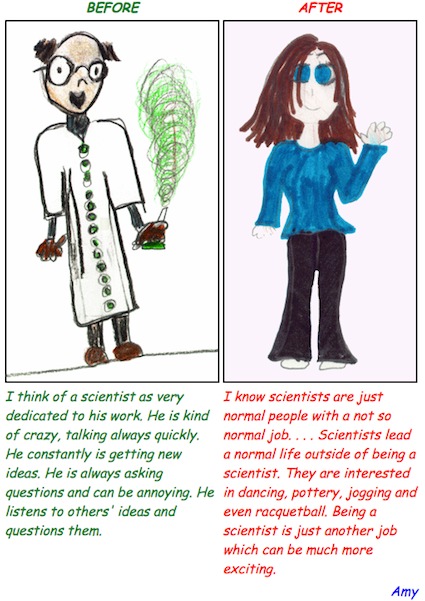 As a blog claiming that “Scientists Are People 2!”, my mission is to continue introducing scientists to everyone else, including seventh graders. But, like the program at Fermilab, I want you to see the scientist as a person with a normal life outside the job. This blog will host interviews with real scientists, as real people. Many of my interview questions will be aimed at finding that unique space between the normal person and the scientist. A place where people from both communities can begin to understand each other and communicate better.

And what better way to describe that place than with humor!

What is “scientists are people 2” going to look like?

The goal of this blog site is to better connect real scientists with… well, everyone else. I realize this connection may already happen naturally. You may even already know a “scientist”! But, you may be asking yourself… “Who really lives within the science community, and is it possible that I have something in common with scientists across all brands of science?”

Either way, this blog space will be strategically designed to bridge those social gaps and remind you (as well as the scientists) that Scientists Are People 2! 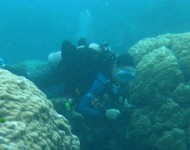